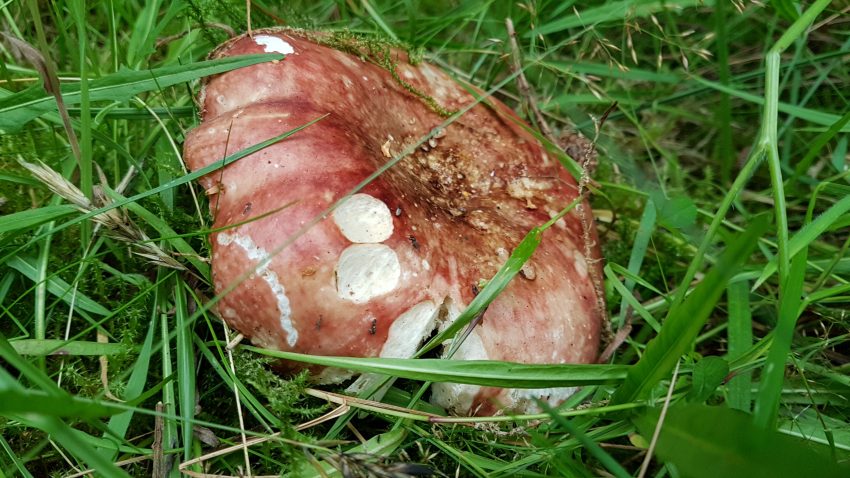 It is a blustery day, to say the least, today. The sky has remained a stubborn grey since early, when the only variation was a shepherd’s warning to the east. Another month or so down the line and a wind like this would be shedding leaves from trees in abundance, but everything is still green enough to remain determined and steadfast at present.

It’s a very different scene to yesterday morning in the woods. Yesterday was one of those stunning September days where you find yourself doubting your memory of only the day before, wondering how on Earth you could think that autumn was only just round the corner. The sun was rich and the woods were calm. There was a comforting earthiness to everything.

I have been paying a lot of attention to mushrooms over the last few weeks. This year, there seems to be an abundance of them, popping up in places I don’t recall them being last year. I have always been fascinated by fungi, something I have in common with my mother, though until recently it was more an interest in the vein of “oh, there you are, little mushroom: good day to you” rather than paying them the attention they deserve. I would love to be able to identify and eat edible mushrooms (though I am still a fair way off having the knowledge and confidence to try this) and have recently started reading about mycology. The folklore associated with mushrooms is fascinating, if outright incorrect at times. One wonders how many upset stomachs (or worse) have to blame a pithy little well-meaning but misleading rhyme or phrase. Folklore in the wrong hands – the hands of the ignorant – can be deadly. But folklore in the hands of those who listen to learn and understand, rather than simply to be able to recite a quaint old wives’ tale, is powerful knowledge. “So laws are made and handed down on what is safe. Formulate.”

Those who write cannot help but allow, however objective they try to be, aspects of their current self or mood seep into their writing. I suspect this is true of everyone who articulates a thought, an idea. Worldviews colour the simplest of observations. I wonder if this is why I have convinced myself that, this year, not only do there seem to be more mushrooms, but there is more evidence of their decay. There seems to be so many more, left in situ, rotting away where they grew this year. Is this really the case, or am I simply imposing an imprint of how I feel about these turbulent times onto what I see around me?

Perhaps, also, it is simply that I am trying to address my own mycological ignorance that I am noticing more species of mushrooms in the woods. Or, maybe, it is that this year we are having to manage the interest of an increasingly mobile toddler who, given half the chance, would quite happily wander around popping pebbles into her mouth and who has, at times, shown interest in the mushrooms that she has found at the side of the path as well.

There is a certain refreshing joy about cheerfully acknowledging one’s ignorance. The bitterness of our damaged school system, obsessed with testing, has encouraged a legacy of denying ignorance all the way up to postgraduate study. As a result, it is surprisingly difficult to encourage students – individuals attending an educational establishment – to believe that they are there to learn. Even when some students start their research studies, they are still so concerned about being criticised for what they do not know or what they have misunderstood that they run the risk of failing to make the most out of their studies. It is not helped that, in some instances, supervisors only reinforce the view that ignorance is most definitely not bliss in a less than collegiate manner.

But, formal education aside, it was with no small delight that I sat down the other day to start reading and learning about mushrooms. I am now eager to extend my fungi-related library, following the advice of John Wright, author of the ‘River Cottage Handbook on Mushrooms’, who confidently states you can never have too many field guides. I m also rather excited about creating some spore prints, following the instructions laid out by Gerald Durrell in his ‘Amateur Naturalist’ handbook (a book I remember my brother devouring when we were younger, but of which I only recently(ish) acquired a copy during a particularly successful charity shop book haul).

There are mushrooms nearly every step of the way in the woods: The Larchwood, The Avenue, and The Greenwood. Though there are similar species throughout, the changes in the landscape mean that there is a wide variety of different species of mushrooms to spot as we wander; whether in the undergrowth beneath lofty conifers, sprinkled with larch needles, on the mulchy-moist floor of deciduous woodland, or climbing up the side of stately beech trees.

I am now a mushroom-hunter – albeit a wide-eyed and tentative apprentice mushroom-hunter – and mentally make notes of where we see the various different kinds of mushrooms so that, next summer and autumn, I can hopefully share a smidgen of knowledge and appreciation with the toddler who trots alongside me now collecting sticks, merrily oblivious to both the origin and power of the fairy rings just off the path.