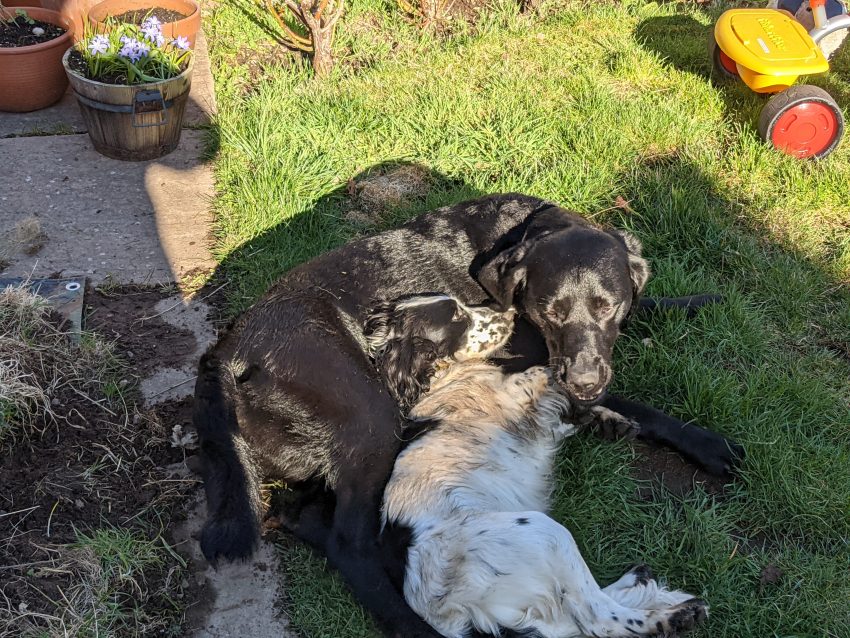 On Easter Saturday, we took a walk in glorious sunshine down to The Obelisk. We were pup-sitting and so, as well as Scapa, we also had a nine-month spaniel puppy running around in a state of perpetual madness. The aim of the walk was primarily to wear out the two four-legged ones so the rest of the day might offer at least sporadic moments of calm.

Fortunately, it was mission successful (or, at least, as successful a mission as it ever could have been – there was indeed a handful of moments of comparative calm later that day in the sun-warmed garden). With sticks on the go constantly, the two dogs were kept entertained for the best part of two hours. For about twenty minutes or so, Auri and I took a seat on a mossed boulder, Auri tucking into a small-scale picnic. It was just shy of hot – more than merely warm – and we were surrounded by promises of green. Despite the two dogs running and fetching, and the constant flurry of activity which accompanied that, there was that certain type of peace one feels in the Greenwood when the year becomes old and warm enough.

Come Easter Monday, and there had been a thick frost overnight which, not long after 6am, enticed snow to fall. On and off all day, there was snow. Never much, but what seemed to be a constant flurry.