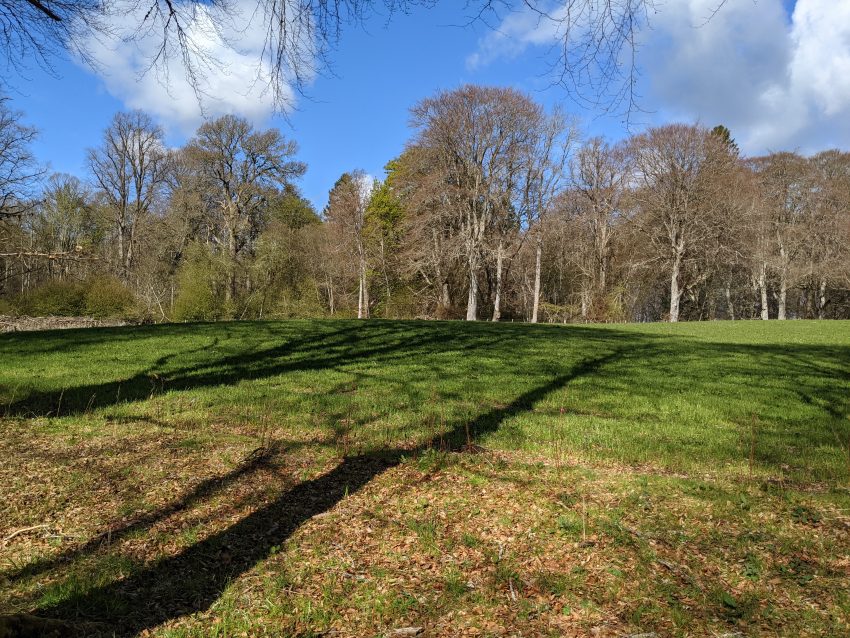 At the bottom of the Greenwood, if you carry straight on after The Avenue instead of turning towards the Obelisk, you reach a crossroads with a towering Douglas Fir. Just past this, if you turn towards the castle and the arboretum, the woodland floor becomes a mass of bluebells in mid spring.

We were too early on Saturday, despite the bluebells already making an appearance further down the other path towards the river. Instead, we were rewarded with not one but two hares dashing across the field between the path and more woodland. Scapa had picked up the scent of something a few minutes previously and had dashed off to investigate but, as she usually does, got bored relatively quickly and came back as happy as anything for more stick-throwing fun, chuffed that she’d decided to look (or smell) into the matter further at all. She was therefore rather pleased and surprised when the hares darted across the field in quick succession moments later; standing, alert, watching them without moving.

She surveyed the situation for some time, watching to see if they’d return or make another dash somewhere. When they didn’t reappear, she gave a canine equivalent of a cheerful shrug and returned to her stick.